CEI recently started performing shuttle box experiments in the wet lab. The set-up of the shuttle box system is simple: two tanks are connected through a short “walkway”, and above the tanks a camera is mounted to monitor the fish movements, with little human interference on fish behavior. 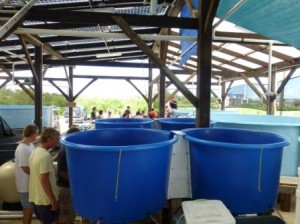 The shuttle box trials complement the critical temperature experiments that the Flats team wrapped up in early October 2012. These experiments tested the range of temperatures that a fish can tolerate before losing equilibrium, and are used to study how the projected conditions for climate change will affect fish in the flats ecosystems. 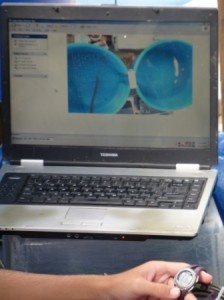 The shuttle box comes provides a unique aspect while studying effects of climate change, by adding a behavioral decision-factor element to the study. Trials will be run using one the common mangrove prey species (bonefish, yellowfin mojarra,  yellowtail snapper and  checkered puffer) in one of the two tanks and a mangrove predator (juvenile lemon shark) in the other tank. Then, the environmental conditions in the prey tank are manipulated to an unfavorable level (i.e. high temperature) and the fish is viewed on the cameras to see when it decides that being in the same tank as the lemon shark, with the threat of predation, is preferred to unfavorable environmental conditions.