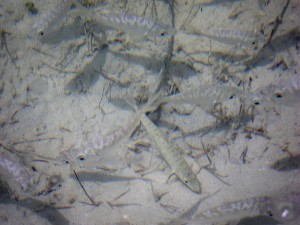 Since May 2011, Christopher Haak, a PhD student (and avid fisherman) at the University of Massachusetts, Amherst, along with other scientists, has been trying to solve the mystery of where juvenile bonefish live, from settlement through the time they join adult populations on the flats.  Exhaustive efforts to locate juveniles along the densely-developed coastlines of Florida were met with little success, leading researchers to the comparatively pristine shorelines of The Bahamas to continue their search.

For the past one-and-a-half years, they have scoured the coastlines of South Eleuthera, conducting 1000+ seine hauls, encompassing a broad range of coastal habitats. This project is funded by Bonefish & Tarpon Trust and based out of CEI.   These efforts (with the help of South-Eleutherans; thanks Denny and Kelsey Rankin!) have succeeded in locating over 800 juvenile bonefish as small as one inch in length, and have revealed some intriguing trends.  For example, contrary to what might be expected, juvenile bonefish do not appear to frequent the mangrove creek systems or expansive tidal flats commonly used by adults, preferring instead to remain along shallow, sheltered shorelines near deeper basins or channels.

Can you find the juvenile bonefish among the mojarra in the picture below? 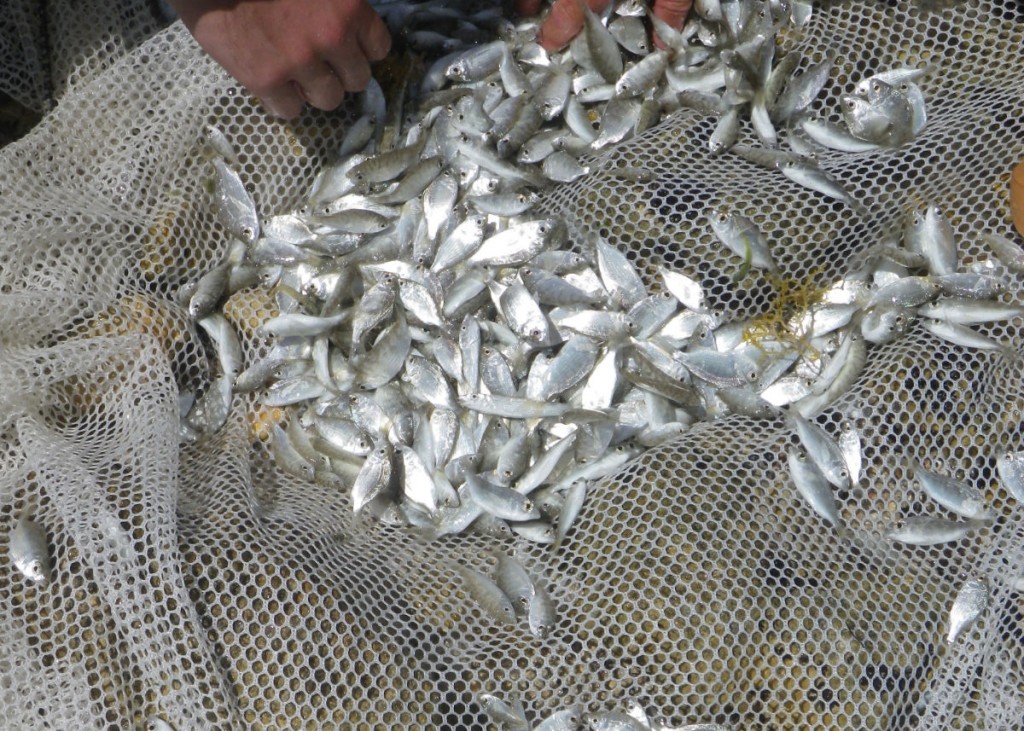 Perhaps the most remarkable finding to date is that nearly every bonefish collected was in the company of much greater numbers of like-sized mojarras (a common schooling baitfish known to Bahamians as shad).  These juvenile bonefish exhibited markings and coloration not apparent in adult bonefish, but very similar to the mojarras with which they were caught.  By blending in with considerably greater numbers of the model species, the mimics may be reducing their predation risk, and increasing their chances of survival.  In the case of bonefish, this hypothesis would also explain why juveniles are so rarely observed; they are well hidden within schools of mojarras!  From a conservation perspective, this suggests that bonefish populations may be dependent upon healthy mojarra populations, important information for resource managers.

This research is also producing valuable information about the diverse juvenile fish communities that inhabit Eleuthera’s shores.  Myriad seine hauls of the island’s beaches, bays, sounds, and creeks have catalogued juvenile fishes from a wide array of species, including other flats inhabitants like permit, reef fish such as parrotfish, jacks, and wrasses, and some very unusual demersal critters such as shortnose batfish.  The high densities and diversity of juvenile fishes revealed by this study serves to highlight the importance of these nearshore habitats to healthy adult fish populations of all kinds, underscoring the need to preserve and care for our coastlines.