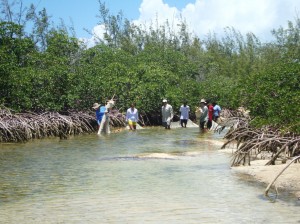 checkered puffer, and schoolmaster snapper were included in the study as model fishes due to their ecological (i.e., nutrient transporters and availability as forage for predatory species) and economic (i.e., sustenance and commercial fishing of snapper, and sport angling of bonefish) importance. The critical thermal is often used to quantify fish tolerance to extreme high or low temperatures and to determine fish resistance to different thermal events.

To test the capacity of these fishes for seasonal temperature acclimation, fish were collected from 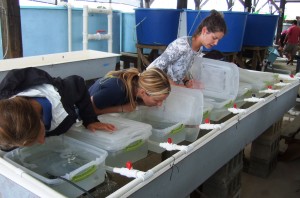 local mangrove creeks during either summer (warm seawater) or winter (cool seawater) months. During CT experiments, fish were placed in individual flow-through containers, and water temperature was gradually increased by electric water heater or decreased by ice for CTmax and CTmin trials, respectively. Periodically throughout each trial, researchers observed the rate of gill movements (i.e., “breathing” rate) and behavior of the fish. The experiment was finished when all fish lost equilibrium, or lost their ability to stay righted. Each fish was then brought back to ambient temperature, and were released following a full recovery. 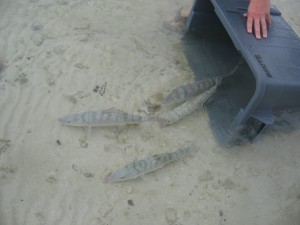 eratures during both CTmin and CTmax trials when compared to trials run during the summer months. CEI researchers will use this information to better understand how climate change-related shifts in seawater temperature might impact key ecosystems and species of The Bahamas, thus providing novel insight into the ecological impact of climate change on nearshore fish communities while highlighting the need for sound ecosystem management in the face of a shifting climate.