Whitney Knowles is a sophomore at The College of The Bahamas, majoring in Small Island Sustainability with a focus in Marine Science. Initially, Whitney worked at CEI as an Aquaculture and Aquaponics intern, followed by a stint as an Educational Programs Apprentice from February to August, but now she has taken on the role of Aquaculture and Turtles Research Apprentice. 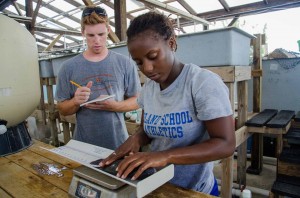 Her current duties include grading tilapia, organizing feeding rates and schedules, collecting fry, getting involved in outreach with DCMS, setting BRUVS for turtle research, tagging and releasing turtl,es and habitat mapping. Whitney’s future goal is to leave CEI with all the knowledge and experience that she has gained, and apply it to her daily life, and to inspire others to do the same. Next summer she is planning on resuming her education at the College of The Bahamas, then moving on to attend Dalhousie University in Nova Scotia, Canada to study Marine Biology and fisheries conservation. Good luck to her in the future, and we are lucky to have her talents a work right now at CEI!