In an effort to reduce the amount of organic waste produced by the various branches at CEI that utilize the wet-lab facility, a Caribbean Spiny lobster (Panulirus argus) ranching project was initiated in mid-December 2012. 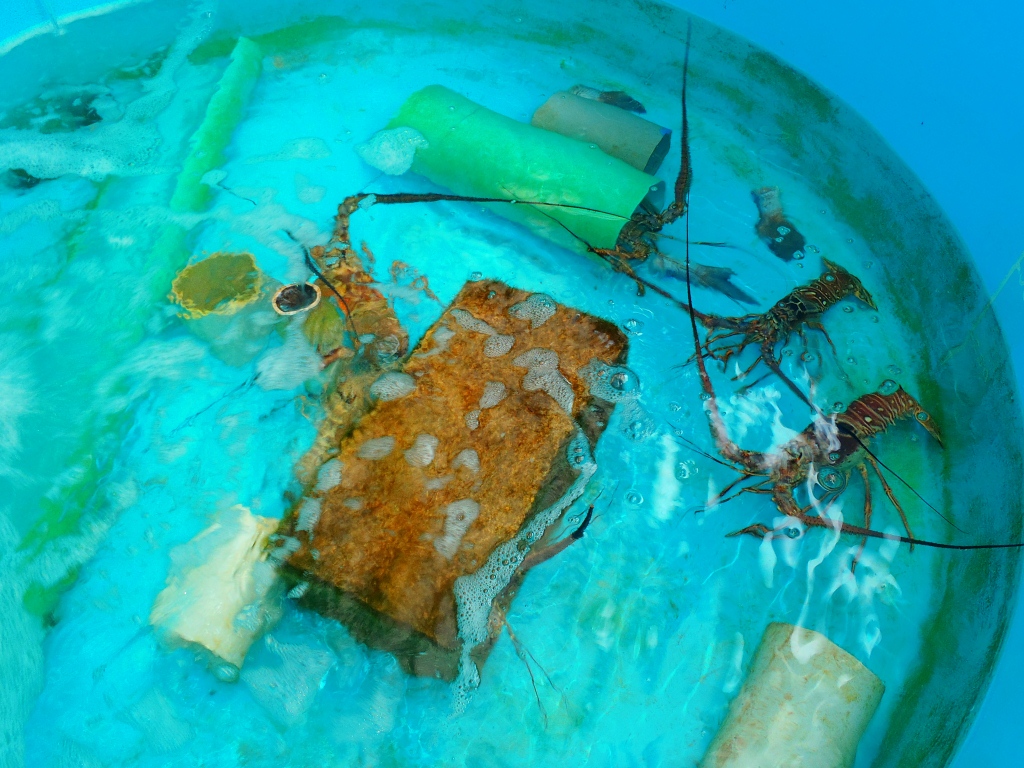 Mature wild-caught lobster were housed in one of the vacant holding tanks in the wet-lab and fed off-cuts, old dissection specimens and any other organic material that would have previously been 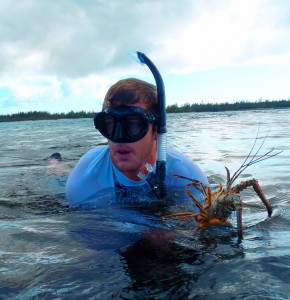 discarded. Due to a lack of published information on ideal stocking densities and holding conditions, another objective of this study is to determine the optimal levels of the above mentioned parameters. A number of capture methods were tested. These include baited cages, pole-snares and by hand. The latter two methods have thus far been the most effective.While the primary focus of this project is waste management, a secondary focus is an attempt to capture Spiny lobster pueruli, pre-settlement. Pueruli refers to a life stage in the lobster between larvae and juvenile. These pueruli are then transported back to the lab, where they are also fed organic waste produced by the lab, chopped into a finer form than that which is given to the mature specimens.

The reason for targeting pueruli is that they naturally occur in relative abundance compared to their mature adult counterparts. Their survival rates in the wild from pre-settlement to maturity are also quite low, due to predation. Captive rearing eliminates this impact. An additional reason for targeting pueruli is that the early life stages of juveniles (prior to reaching the puerulus phase)  are numerous and difficult to care for in captivity. They require a varied diet of live feeds and are very susceptible to fluctuations in environmental parameters (pH, salinity, ammonia concentrations, etc.)

This method of cultivation is highly successful in SE Asia, using the lobster species Panulirus ornatus and P. homarus. This success is due to the fact that there is an abundance of pre-settlement pueruli present in certain parts of Indonesia and Vietnam that are easily captured. This method, however, hasn’t been very successful in other parts of the world, namely Australia. For this reason, focus there has been placed on hatchery technology. This wouldn’t be very feasible at CEI due to equipment, power and space requirements.

The method for capturing these pueruli employs the use of settlement traps. In essence these are submerged frames draped in strips of fabric/netting, placed in strategic positions in the wild that mimic the seaweed/grass found naturally in the area. This attracts pueruli to it, as they seek shelter from predation by hiding amongst the strands. These traps are checked regularly, and any specimens found on the traps are captured by means of a hand net. Opinions are varied regarding the best time to check the traps, but moon phase seems to play a roll. New moon seems to be a favoured option.

Lobsters are the reef’s janitors, and we hope to they can perform the same function here at CEI. And, hopefully in the not too distant future, provide us with some tasty lobster tails.