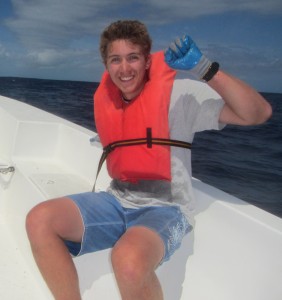 Ian Bouyoucos graduated from the University of Michigan with a degree in ecology and evolutionary biology. This research assistant position is his third time at CEI, following an internship in the summer 2010 and spring 2013 semesters. Ian’s research background is focused on shark stress physiology, as well as sturgeon bycatch reduction. Specifically, he has conducted research concerned with the secondary stress response in the smooth dogfish, and the potential for electropositive metals to serve as a method of bycatch reduction for Atlantic sturgeon. In addition, he has assisted on projects dealing with nursery habitat use of juvenile lemon and blacktip sharks, and bycatch reduction in sandbar sharks. On top of the research he will be involved in with the shark research and conservation program, Ian will be conducting a project focused on the immunological response in yellow stingrays to a chronic stressor, which will serve as a model for sharks. 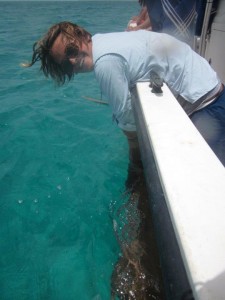 Mackey Violich is one of the new research assistants for the shark program. Mackey just graduated from University of California Berkeley, with a double major in Marine Resource Management and Environmental Economics and Policy. During college she spent a month in Fiji diving and studying the behavior of bull sharks. She has a long history with the foundation; she started as an Island School student in the fall of 2006 and she is a member of the Island school advisory board. She returned in the summer of 2009 to complete her dive masters and last summer as an intern for the shark program. This fall she will focusing on characterizing the deep-sea fauna with the Medusa, a baited remote underwater survey camera. The camera will be dropped in the Exuma Sound, in depth ranging from 470m to 850m. She will be working along with Island school students doing these surveys and video analysis. 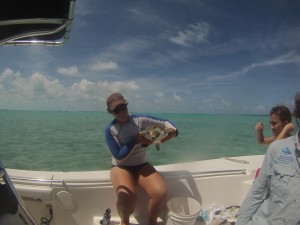 Meagan Gary is a new Research Assistant for the sea turtle program at CEI. She’s from Grand Rapids, Michigan and is a recent graduate of Colorado College with a degree in Biology and minor in Spanish. Meagan was an Island School student in fall 2007 and an intern for the shark program in the summer of 2010. Meagan has had a variety of prior research experience. She interned with the Namibian Dolphin Project in 2012, assisting with dorsal fin and fluke photo-identification of bottlenose/Heaviside dolphin and humpback whales as well as examining behavioral and acoustic data of bottlenose dolphins. During the Spring of 2012 she did an ecology-focused study abroad program through Boston University in Ecuador. During the five months that Meagan was there she conducted a variety of minor research projects including foraging habitat preferences of Amazonian bats and catch rates of sharks in a small-scale artisanal fish market. While she is at CEI, she will be working with Annabelle Brooks studying juvenile and sub-adult green turtles. Meagan will be tagging turtles with capture-recapture methods, habitat mapping, and using Baited Remote Underwater Surveys (BRUVS) for predator surveys. She will also be teaching Island School turtle research students many of these different research techniques.